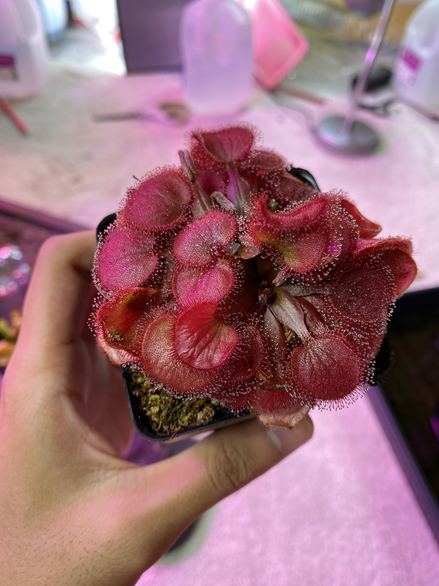 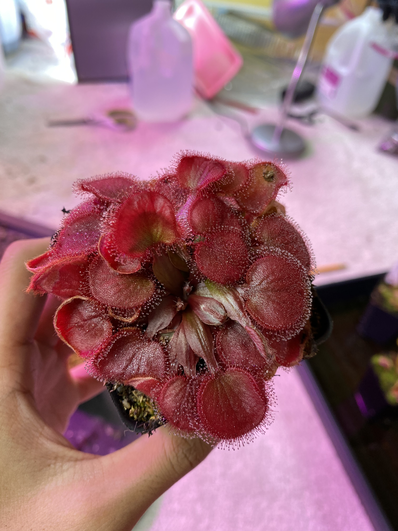 Solid red everything
Drosera falconeri belongs to the petiolaris complex (subgenus Lasiocephala), a group of Drosera known as "woolly sundews" and native to northern Australia. Distinguished by their long petioles that are often covered in a silvery hair, these plants look like tiny pincushions or sea urchins. They love high light, warm temps, and lots of water. An iconic species of petio complex Drosera with huge red, taco shaped leaves that's very distinct from any other plant in the complex. Native to sandy coastal areas in Northern Australia along the Finnis River, this plant can often be found in shady areas as well as bright open full sun environments.  Unique among carnivorous plants, this species is often found growing in alkaline calcium rich soils. It looks like a weird sundew-fied version of a venus flytrap. The traps even fold in half like a flytrap, and many speculate they could be (distantly) related. This plant is weird for me. Sometimes, it's the easiest growing petio complex Drosera I have and clumps, while other times it sulks or dies back for no apparent reason. I keep it constantly warm and well watered, as well as feed often. Temperatures never drop below 78F. feeding can be especially helpful after flowering, and I like using rehydrated bloodworm meatballs. All of this is worth it for the large undulating leaves and deep crimson red color (this plant is usually more orangey red than red, but can color up nicely under LEDs). This plant also won 3rd place in the national BACPS plant contest, so definitely a must have for any grower. I've noted it seems to prefer a peaty sandy mix rather than sphagnum moss.