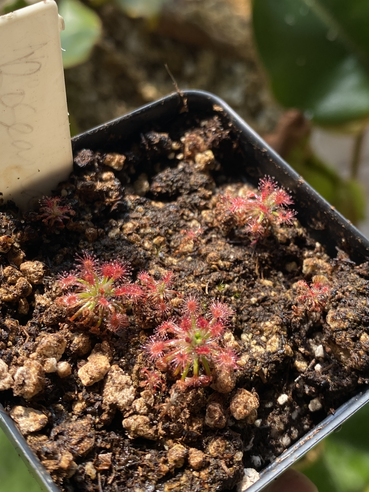 Newly received plants (9/23/2020)
Pygmy sundews are a subgenus (Bryastrum) of Drosera that are all very small. Native to western Australia, these plants grow in sandy soils that experience cool wet winters and hot dry summers. They reproduce using small brood bodies called gemmae, and often become dormant in warmer weather, dying back to a cone shaped mass of stipules. Named after Steve Rose, an Australian Plant enthusiast and photographer,  this species is found on the southwestern tip of Australia. Recently got this plant as of late September 2020. Drosera roseana seems to be a pretty typical species of pygmy sundews. It's one of the medium sized species, as it's much bigger than the tiny occidentalis, but it's smaller than scorpiodes. The traps are a bright ruby red, and the plants themselves grow in a nice upright shape that looks a bit like a small pincushion The stipules are also noticeable and make the plant look furry. Currently growing in a typical pygmy mix of peat and sand.