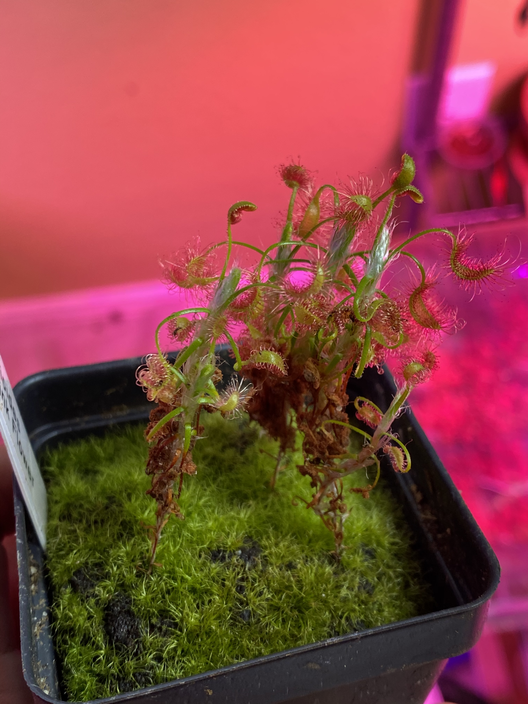 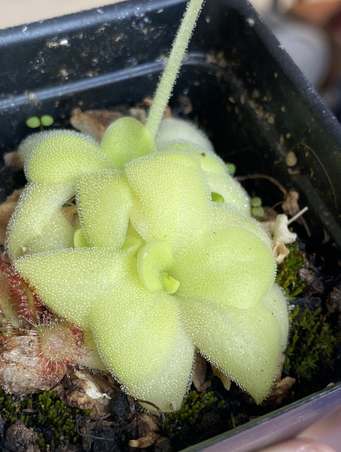 3 year old plants after dying
Pygmy sundews are a subgenus (Bryastrum) of Drosera that are all very small. Native to western Australia, these plants grow in sandy soils that experience cool wet winters and hot dry summers. They reproduce using small brood bodies called gemmae, and often become dormant in warmer weather, dying back to a cone shaped mass of stipules. Drosera scorpiodes is the giant of the pygmy sundews at a whopping...2 inches tall. Size doesn't matter, as this plant is probably one of my perosnal favorite sundes. The plants have a lot of character, as the traps seem like outstretched arms and grow upright like tiny trees. It's also one of the easier pygmy species, and produce large and easily manageable gemmae (reproductive bodies). There's a white flower form that grows slower and smaller but can survive several years, and a larger pink flower form that grows fast and dies quick. I grow the pink flower form, and they can get massive (picture 2). The tentacles are also among the fastest moving, and you can see with the naked eye the large outer tentacles fold over prey. Pygmy sundews seem to prefer a well draining mix with sand or perlite.