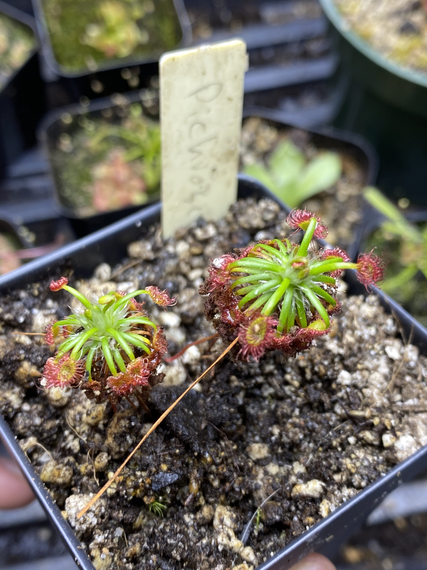 Recently received plants, late September 2020
Pygmy sundews are a subgenus (Bryastrum) of Drosera that are all very small. Native to western Australia, these plants grow in sandy soils that experience cool wet winters and hot dry summers. They reproduce using small brood bodies called gemmae, and often become dormant in warmer weather, dying back to a cone shaped mass of stipules. Named after the bumpy, warty seeds (verrucatus meaning wart-like in Latin), Drosera verrucata is found in clayey soils often also inhabited by shrubs. This upright growing pygmy is one of the larger species, and will slowly form an upright stem skirted with dead leaves. Not quite as large or tall as scorpiodes, but noticeably bigger in stature than most others. Almost like a miniature scorpiodes in my opinion.  The traps themselves are rather elongated, and a orangish red color. They're not as tightly packed as some species and instead spread out and grow upwards. The plant itself also forms a small stem, much like, but not as dramatic as Drosera scorpiodes. I've yet to flower this plant, and it's potted in a typical mix of peat, perlite, and sand.