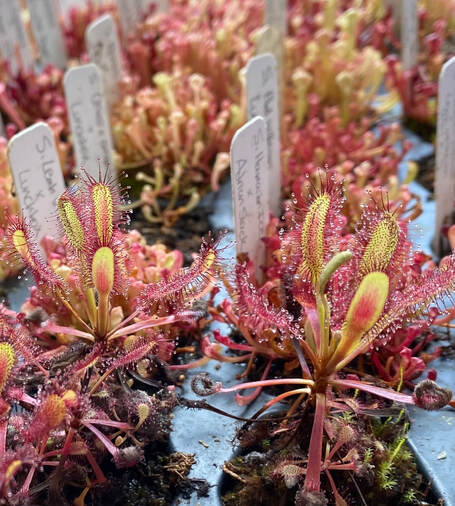 Several seedgrown plants
These plants were seed grown from a batch of selfed 'Hercules'. Even though 'Hercules' is a cultivar and only plants created through vegetative means are true, these selfed seedlings appear identical to 'Hercules'. Wide leaves, upright growth habit, and vigor. The seedlings I have respond well to Maxsea feeding
'Hercules' is a registered cultivar who's parentage is unconfirmed. It's possible it's a pure wide leaf capensis that's even more beefy than usual, or it may have some aliciae introgression. However, this is unlikely as aliciae capensis hybrids are infertile, and 'Hercules' makes copious amounts of very viable seed. What’s more plausible would be a polyploidy mutation, explaining both the large size and flowers, as well as the ability to self seed and cross with other capensis. One day, we'll be able to investigate this without throwing obscene amounts of money at it.