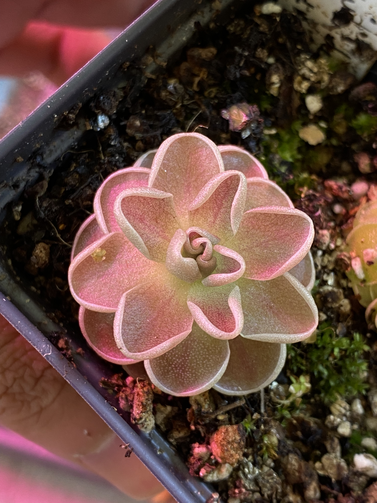 Pinguicula debbertiana is a relatively newly described species from Mexico, in state of San Luis Potosi, Huizache crossing. A member of section Crassifolia, this plant is closely related to species like esseriana, juamavensis, and ehlersiae. Much like those species, the plant has succulent looking, overlapping leaves with obvious margins. However, this species colors up to a much more deeper purple color than esseriana and juamavensis. While not much is known about the habitat of this species, it's probable that they are similar to other Crassifolia members,  growing on wet rocks or pockets of moss.
Care for this plant does not differ from your typical Mexican Pinguicula, appreciating well draining soils, mild temperatures, and strong light. The more light, the deeper the purple color becomes. I have noticed this species has slightly wider leaves than esseriana and jaumavensis, and not pointed like those of ehlersiae. Currently growing in vermiculite, perlite, crushed coral and peat, my specimen has not flowered yet. There also exists white flowered forms of this species, but I'm not sure if I'm willing to fork over money for that.