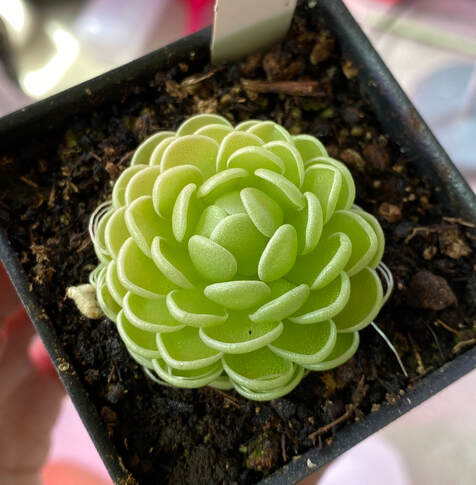 This species is a member of section Crassifolia, which are smaller species with tightly packed, upturned leaves. Species such as esseriana, debbertiana, jaumavensis, and ehlersiae all belong to this group, and may appear so similar many think they're the same species.  Pinguicula esseriana is a small, succulent like ping found in San Luis Potosi near El Huizache. This clone of esseriana I got dwarfs both my normal and black forms. The rosettes are close to 2" across, and the leaves are much more rounded and less angular than typical esseriana. It also seems to stay a jade green, rather than turn pinkish. I'm not exactly sure where this clone originated from, but it's rather fast growing and puts out lots of new leaves constantly. I'll try propagating it this winter and distribute it, as I don't see this variety too often in the US. I've also yet to flower this one, but I can't imagine the flowers would look too much different.