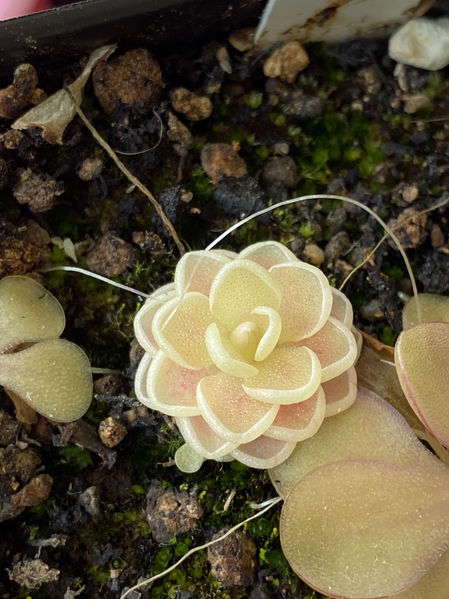 Note the aerial roots, used in the wild to anchor itself

This species is a member of section Crassifolia, which are smaller species with tightly packed, upturned leaves. Species such as esseriana, debbertiana, jaumavensis, and ehlersiae all belong to this group, and may appear so similar many think they're the same species.  Pinguicula esseriana is a small, succulent like ping found in San Luis Potosi near El Huizache. The plants rarely get bigger than a quarter and have distinct overturned lip margins. When they go dormant, the succulent winter leaves are super dense and break off easily, making it easy to spread around. This plant is relatively slow growing for me, but it’s easy enough and tolerant of a wide range of soil, light, and temperature. When given strong enough light the leaves blush a light pink. It also seems to like sending out long roots above soil,  showing it's origins as a epiphyte/lithophyte.