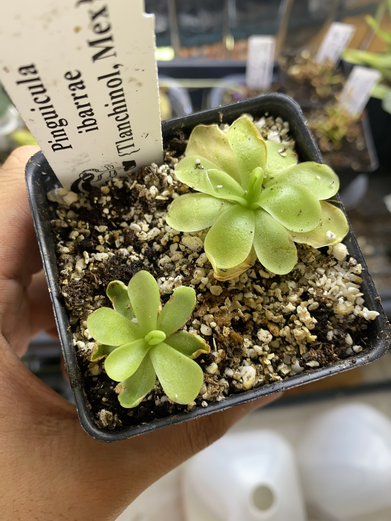 The Agnata section of Pinguicula includes species such as agnata, gigantea, albida, and filifolia. Pinguicula ibarrae is a plant that's often lumped together with agnata. Originally described as a form of agnata from Tlanchinol or as sp. Tlanchinol, this plant is found in three different locations (locations from Pinguicula.org)

The plants are found on steep slopes comprised of sedimentary rock consisting mostly of clay (also known as rocas lutitas). These areas are protected from direct sun and wind, with humidity being high and temperatures mild. Pinguicula ibarrae can form large rosettes, and the leaves can often tint reddish. Flowers are small compared to the size of the plant and appear almost identical to P. agnata, with a round shape and short spur. This plant is currently potted in a mix of peat, vermiculite, perlite, and crushed coral. I'll update as this plant settles in, but so far seems to be a typical grower. It may be important to keep it slightly more damp year round (similar to other agnata complex species). I'm going to be completely honest, unless this one starts tinting red like some do in-situ, it may win the award for most boring Pinguicula in my collection. Hooray.