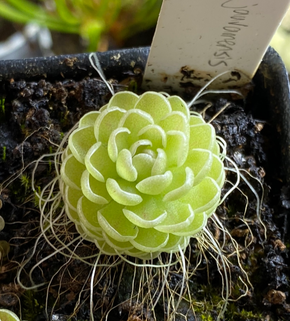 Crazy roots!
This species is a member of section Crassifolia, which are smaller species with tightly packed, upturned leaves. Species such as esseriana, debbertiana, jaumavensis, and ehlersiae all belong to this group, and may appear so similar many think they're the same species. Pinguicula jaumavensis is a species found in Tamaulipas state, near Jaumave, growing on feldspath rock that's often dripping with water. This species appears similar to esseriana and debbertiana, and is often considered the same species. Quite an easy grower, this plant doesn't seem to color up too much and loves to produce long aerial roots. It's currently growing great in a media of vermiculite, perlite, sand, and peat. Houseplant people tend to go crazy over species like this, since they look like a normal, (boring) succulent plant.