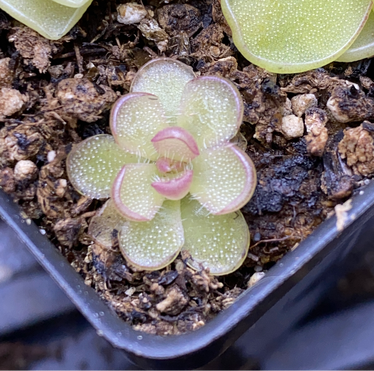 There seems to be some controversy between the P. kondoi and P. recticulata.

"As for the differences between P. kondoi and P. reticulata, most people seem to consider the latter a synonym of the former, but according to Jan Schlauer (author of P. reticulata) the real P. kondoi is not in cultivation and has never been found again, what everybody grows and knows is actually P. reticulata."
[Pinguicula.org]

However, the descriptions of the species match closely and may end up just being synonyms for each other.  Taxonomy is a science that consists of 90% arguing,  8% digging through old herbarium specimens, and 2% actually naming a species.  P. kondoi/reticulata is native to the areas around Aramberii,  Nuevo Leon. It belongs to section Heterophyllum subsection Isolobopsis. Pinguicula kondoi giant is a cute little plant with strongly upturned leaf margins, which can darken into a crimson in strong light. What's interesting about this species is it's small hairs found in the center of the plant, similar to species like rotundifolia. The flowers are oddly circular with fine veins throughout. Currently potted in a coarse mix of peat, perlite, vermiculite, and crushed coral.