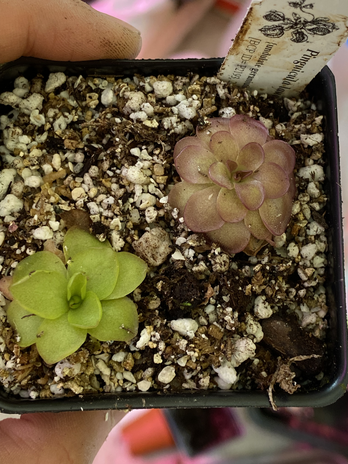 Pinguicula laueana recently repotted 11/23/21
Pinguicula laueana was discovered by Alfred Lau in the high elevations of Sierra Mixe in the state of Oaxaca. All plants currently in cultivation originated from this location, originally collected by Lau. In the wild, this species is found growing terrestrially, lithophytically, and epiphytically. Different clones have varying leaf and color flowers, and color flowers range from magenta, red, and violet. There is also quite a bit of variation in the size and shape of the flowers, with some having more rounded shapes while others more narrow. This plant is originally from Best Carnivorous Plants in Europe, and has rather typical looking foliage. It has yet to flower, but will update when it does. Currently growing in a mainly inorganic mix of vermiculite, perlite, coarse sand, crushed coral, and small amounts of peat like most other lithophytic pings. I have not yet given this plant a dry winter dormancy, as in-situ this dormancy apparently occurs cyclically, rather than annually. I'm excited to see this variety flower, as the words "undulate" and "geranium" conjure up images of very large, fancy flowers. If the flowers don't look like this, I'm marching to Kamil Pasek's door and demanding a name change.