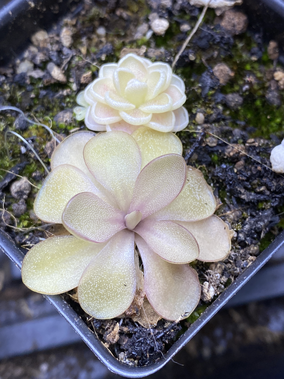 Pinguicula potosiensis belongs to section Orcheosanthus, which are most notably characterized by a very long spur that is longer than the corolla tube. A relatively uncommon species from San Luis Potosi, at 48 km East of the town of San Luis Potosi. This plant is found on rocky and mossy outcrops in deciduous forests, often in relatively deep shade.. The plant itself has long leaves that are tinted purple near the center, and have a subtle leaf margin that's more noticeable on the newer leaves. There seems to be several color forms in cultivation, ranging from green to a darker red. My plant has yet to flower, but the flowers are a deep violet color and appear similar to those of P. moranensis. This plant is currently growing alongside P. esseriana in a mix of peat, perlite, and vermiculite. However, it would be interesting to try this species in a more organic media, as many plants were growing in organic soil in-situ.