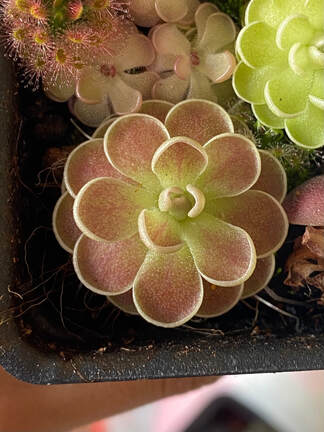 Note the veins, which are not seen in esseriana
Pinguicula spec. El Mirador is an undescribed species of Pinguicula from El Mirador, Guatemala. This species is a member of section Crassifolia, which are smaller species with tightly packed, upturned leaves. Species such as esseriana, debbertiana, jaumavensis, and ehlersiae all belong to this group, and may appear so similar many think they're the same species. This species is most similar to esseriana, but with slightly rounder leaves and some veins. In my opinion, looks like a mix between esseriana, debbertiana, and jaumavensis.  Excited to see this species get described, but will probably just be lumped into one of the aboce species. Currently growing in a mix of peat, perlite, vermiculite alongside other Pinguicula. A rather easy but somewhat slow grower much like other Crassifolia section species. Has not flowered for me yet, but will update when it does so.  This is one of the species that house plant people will fawn over. I'm dreading the day pings like these end up as painted novelty plants that slowly wither away in a dark bathroom.